A lot of fishermen still continue using regular single- or dual-frequency sonars to find fish, the technology that’s been around for three decades. It’s likely, you have also heard about new technologies like a CHIRP sonar. We are going to explain here the CHIRP, and how it can enhance your fishing and boating.

The sonar sends a strong ping below the water at a certain frequency, then when the ping reflects back, it will be processed and translated on to the display as a useful information about what’s going on below. It produces an image of the underside, shape and fish. This ping or a sound wave “rhythm” may be powerful, but the length of time is quite short which simply restricts the total amount of energy that can be sent into the water area. Varied frequencies uncover different levels of information. For instance, a high frequency 200 kHz ping offers fantastic detail, but can’t sink very deeply into the water. A low-frequency 50 kHz ping goes down much deeper, but shows less information. This is why most common sonars have a dual-frequency transducer to present a good mixture of depth and details.

The CHIRP stands for Compressed High Intensity Radiated Pulse. When regular sonar sends one single frequency or “ping” each time, CHIRP transmits a steady flow of frequencies, varying from low to high (and ten times as long in duration). The CHIRP technology then reads the frequencies independently once they return. Because this steady flow of frequencies CHIRP can offer much broader range of details, also CHIRP sonar is capable to produce a much clearer, higher resolution picture on the display.

CHIRP also boosts bottom tracking at higher speeds and deeper depths. It aids establish individual targets, no globs, but rather crisp separating of surrounding stuff. The outcome is a stunning advancement in the picture you see. It is less difficult to tell apart fish from underwater formations when they are really close to one another, and even schools of baitfish from formations below. CHIRP sonars are usually rated by power – higher power means less details but more depth, perfect for rather deep fishing or saltwater fishing. 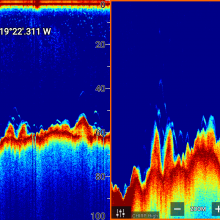 There are some frequency ranges you can choose when purchasing a CHIRP equipped finder. Essentially it’s comparable to the standard 2D sonar. Frequency is the number of entire series or vibrations that take place within a specific timeframe, usually one second. It is measured in Hertz.

High CHIRP (130-230 kHz) is for inland and freshwater. With more cycles per second, high-frequency sound waves are smaller and move less range than low-frequency sound waves. The advantages are a better quality picture of what is found under the boat, such as a clean image of the bottom. For depths less than 800 ft.
Medium CHIRP (80-130 kHz) shows a broader coverage area, checking large areas more quickly, displaying larger fish arches but offering less detail than high CHIRP for discovering smaller objects. It’s good for depths less than 1000′.
Low CHIRP (42-65kHz) is used in deep waters over 600′, gives remarkable depth performance (up to 10,000′) and represents targets at all depths in the water section.

The more expensive CHIRP devices let you see two CHIRP frequencies at once, so you can scan an extensive cone on the medium frequency CHIRP group. It’s quite useful when you have found somethings that needs a closer look, the two frequencies at once feature/setting comes quite handy here.

Picking out the ideal frequency for your particular plan is rather important. We hope we have helped you better understand its enhanced possibilities over the regular sonars and that you now feel confident in obtaining one. No matter what your price range is, CHIRP sonar has evolved the fish finding activity. There’s never been a better time to move up to this fascinating new technology.

Iconic One Theme | Powered by Wordpress